Imagination has no limits...
Close
Login
You can login using your social profile
Connect with:

Every month, we will feature a book for our Share and Tell event. Share and Tell readers are limited to the first ten newsletter subscribers who email us and commit to reading the book and to considering posting reviews on Amazon and Goodreads. They must also answer a few questions about the book and participate in the end of month Facebook get together with the author. This get together is where readers get to know the author and learn the story behind the story.

Share and Tell is first come, first serve. The first ten readers to email us and commit to the terms will receive a complimentary copy of the current month’s book.

Newsletter subscribers may email us at scarsdale@scarsdalepublishing.com with the subject heading (current month) Share and Tell.

If you are not already an email subscriber, join our newsletter HERE and keep up on all our great releases and news.

Duty and Desire, Book One in the Winds of Fire series by Anju Gattani

To uphold family honor and tradition, Sheetal Prasad is forced to forsake the man she loves and marry playboy millionaire Rakesh Dhanraj while the citizens of Raigun, India, watch in envy. On her wedding night, however, Sheetal quickly learns that the stranger she married is as cold as the marble floors of the Dhanraj mansion.Forced to smile at family members and cameras and pretend there’s nothing wrong with her marriage, Sheetal begins to discover that the family she married into harbors secrets, lies and deceptions powerful enough to tear apart her world. With no one to rely on and no escape, Sheetal must ally with her husband in an attempt to protect her infant son from the tyranny of his family.

The Moon Above by Brett Davis

In memory of Jean Marcel Nicolas/Johnny Nicholas, a Haitian in the Dora camp who pretended to be a U.S. Airman. This tale is what his life might have been like had that been true. The tale of a Tuskegee Airman. Johnny Nicholas’s dream is to fly airplanes—an impossible dream for a Black man in 1930s America. After WWII started, the Army launches an experimental program to train Black pilots in Tuskegee, Alabama. Against this parents’ wishes, Johnny boards a train headed to the segregated South. But even the rising death toll of World War II may not be enough incentive for the government to allow Black pilots to fly bombers. As Johnny grows convinced that the war will end before he sees a battlefield, the Tuskegee airmen are ordered to the European front. In Italy, reality quickly dispels his daydream fantasies of dogfights and glory, and one unshakeable Jerry on his bomber’s tail paves the way to a hell that few men escape and a mountain of bones that reach to the moon. 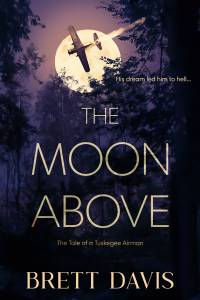